Germany/Erlangen, 2 July 2022. The hydrogen filling stations that have been predominant up to now, supplied exclusively with compressed hydrogen, have limited storage capacities and a high space requirement. This is smaller for liquid hydrogen refueling stations, but hydrogen losses occur during longer storage periods. A viable solution for the future on a small footprint and with particularly safe, simple handling of the hydrogen is now demonstrated by the world’s first hydrogen filling station to additionally use LOHC technology, which was inaugurated with a ceremony on July 2. This new station at Henri-Dunant-Strasse 2 in Erlangen, built and operated by H2 MOBILITY Germany, is supplied with hydrogen not only in gaseous form but also via liquid organic hydrogen carriers (LOHC) from Hydrogenious LOHC Technologies. The system of the LOHC market leader installed there in urban areas ensures the release of the gas molecules chemically bound in the LOHC. One of the compelling advantages of the hydrogen carrier material used in this process is benzyltoluene: Storage and stockpiling require only conventional underground tanks for liquid fuels, installed in a space-saving manner directly buried beneath the release system.

The deployment of LOHC at the Erlangen hydrogen filling station is part of Hydrogenious‘ broader H2Sektor pilot project, which has received subsidies from the Bavarian State Ministry for Economic Affairs and Energy due to its innovativeness and relevance (duration 2020 – 2022): H2Sector involves the development and research of a complete LOHC-based chain from green hydrogen production to transport and precisely to the use of hydrogen for mobility. The starting points are the generation of solar power via a PV system and its conversion into green hydrogen via a PEM electrolyzer at Hydrogenious‘ headquarters in Erlangen. This is followed directly by hydrogen storage in the LOHC. A conventional tanker then transports the LOHC to the new Erlangen hydrogen filling station, where it is stored in underground tanks (30 m³ each), enabling hydrogen to be stocked in quantities of 1,500 kilograms. Such large hydrogen volumes in storage are not yet common at pressurized hydrogen refueling stations. Via its release system, which is connected to the underground tanks, Hydrogenious then ultimately provides green hydrogen with the highest degree of purity (according to the DIN EN 17124 or ISO 14687 standard) as a vehicle fuel.

The liquid organic material benzyltoluene utilized by Hydrogenious LOHC Technologies – well-established in industry as a heat transfer medium – brings with it ideal properties for use as a hydrogen carrier: The potential hazard is very low, as it is flame retardant and non-explosive. It has a high volumetric energy density and can be handled like a fossil liquid fuel in existing infrastructure at ambient pressure and temperature. After dehydrogenation, it can be reused many hundreds of times to bind hydrogen.

Dr Daniel Teichmann, CEO and founder of Hydrogenious LOHC Technologies:
“With our LOHC-based solution, hydrogen refueling stations can be supplied with hydrogen easily, safely and in an area-optimized manner, especially in densely populated, urban areas. With the H2Sektor project, we are laying the foundation for large-scale hydrogen refueling stations, which are needed especially for commercial vehicles and the operators of large hydrogen-based truck and bus fleets, thus supporting the decarbonization of the mobility sector. From the operation of the very first LOHC-supplied refueling station, we will gain valuable practical knowledge for the production, transport and supply of green hydrogen for mobility applications. Together with other hydrogen offtakers from industry and transport, the Erlangen filling station will become part of our transregional supply chain for green hydrogen, which we are developing with European partners, for example, as part of the Important Projects of Common European Interest.“

Hubert Aiwanger, Bavarian State Minister for Economic Affairs, State Development and Energy and Deputy Minister President:
“The success of Bavarian energy research is coming to fruition today with the opening of the world’s first hydrogen refueling station using the LOHC technology we are promoting, setting standards for the upcoming market ramp-up. Thanks to LOHC technology, hydrogen can now be stored on a significant scale without any problems and can also be used again. With this we have achieved a breakthrough.“

Lorenz Jung, Chief Commercial Officer, H2 MOBILITY Germany:
“We are pleased to be testing the innovative LOHC technology at our Erlangen hydrogen filling station, which offers hydrogen at two pressure levels – 350 bar for buses and commercial vehicles and 700 bar for H2 cars. Hydrogen will play a significant role in decarbonization in transportation. Because whenever distance, time or payload weight play a role, hydrogen is the optimal solution.“ 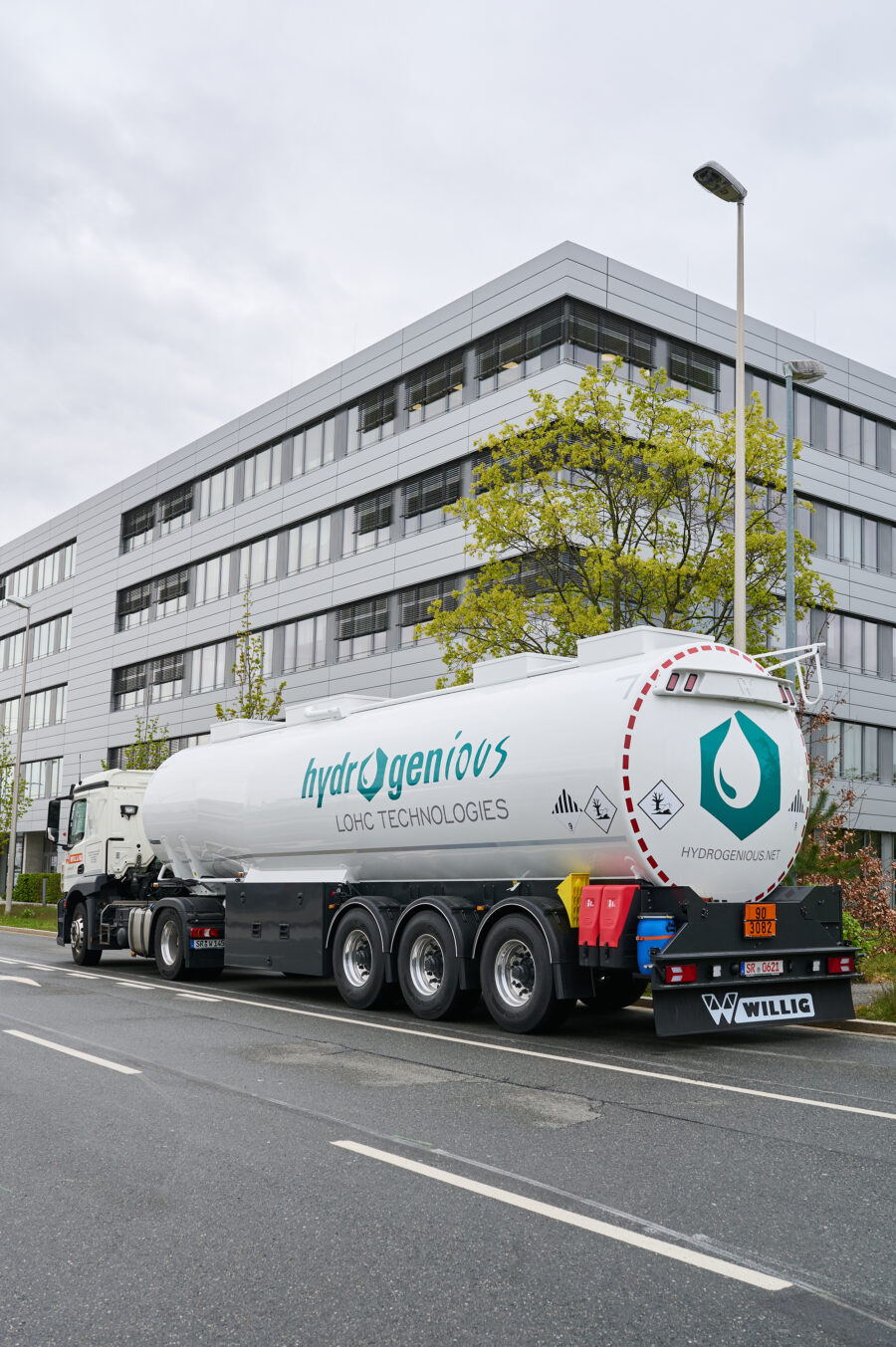 The new LOHC tanker from tanker manufacturer Kurt Willig GmbH & Co. KG provides the LOHC logistics part and transports both the hydrogen-loaded LOHC and the unloaded material at the same time, thanks to its multi-tank chamber system. ©David Häuser

About the LOHC tanker

For LOHC transport, a tanker truck from tanker manufacturer Kurt Willig GmbH & Co. KG is used. The vehicle has 5 tank chambers with a total gross capacity of 45,000 liters and allows simultaneous filling and emptying of the LOHC loaded with hydrogen and the LOHC unloaded. Two pump-measuring systems with mass counter allow simultaneous receiving and discharging of the products.

About the dehydrogenation plant (ReleaseBox 10)

The dehydration or release system (ReleaseBox 10) operating in the H2Sector project at the Erlangen filling station is a 30-foot container. The release takes place with a compression of 45 bar. From the ReleaseBox, the hydrogen enters an intermediate storage tank, which ensures compression to the 350 bar (bus, truck) and 700 bar (passenger car, light commercial vehicle) required for refueling. For refueling stations of large hydrogen truck and bus fleets, larger release plant systems are available in a capacity range of about 1.5 tons of hydrogen per day. These would be connected to correspondingly large underground tanks.

The small dehydrogenation or release facility (ReleaseBox 10) operating in the H2Sektor demonstration project at the Erlangen hydrogen filling station releases around one kilogram of hydrogen per hour from around 20 liters of LOHC material. Since 2022, Hydrogenious has been pursuing the development of significantly larger release facilities in a capacity range of at least 1.5 tons of hydrogen/day. ©Hydrogenious LOHC Technologies.