Hydrogen will play a large and vital role in satisfying future global low-carbon energy demand. Although hydrogen is today a large market (c$80bn per annum), it is generally produced and consumed at the same site, for example in the production of ammonia or in the refining of oil. One of the reasons for this is that storing and transporting hydrogen using incumbent technologies is difficult, both physically and commercially.
As the hydrogen economy gains momentum, storing and transporting hydrogen become increasingly critical if low-cost, low-carbon hydrogen supply is to match demand. Liquid Organic Hydrogen Carrier (LOHC) is a disruptive technology that can meet this objective safely and economically. Furthermore, LOHC has the ability to establish hydrogen as a globally traded commodity.
Hydrogenious LOHC Technologies (“Hydrogenious”), the global leader in LOHC, is making this vision a reality.

The ability to store and transport hydrogen is becoming increasingly critical as low-carbon hydrogen replaces traditional carbon-emitting products as an energy source and feedstock. A number of low-carbon hydrogen production hubs are emerging, either based on natural gas, with associated carbon capture (blue hydrogen), or where renewable energies such as solar and wind are abundant, and hydrogen is produced through electrolysis of water (green hydrogen).
To establish an interconnected global hydrogen economy, low-carbon hydrogen needs to be transported in large volumes from low-cost sources to end-uses in a storage medium that is safe, utilises existing familiar global infrastructure and is cost competitive. 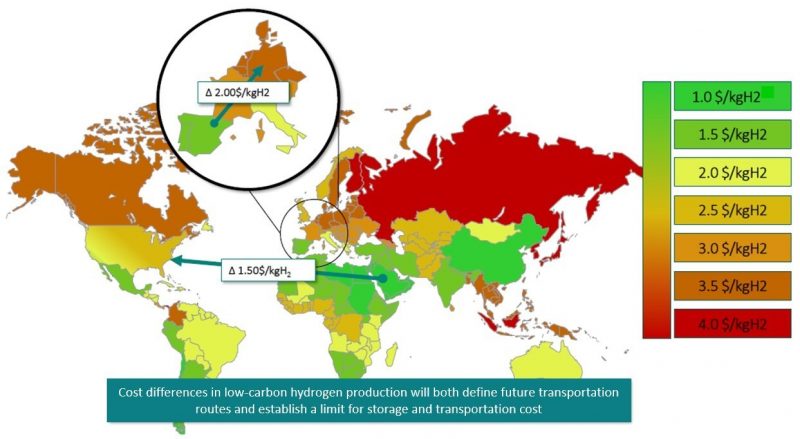 Compressed gas storage is widely used to store hydrogen, although it suffers from low storage densities, even at high pressures. As storage pressures increase so do both the associated cost of the materials and safety risk. Higher pressures also introduce further challenges associated with reliable compression, handling and regulatory restrictions.
Hydrogen can be stored in liquid form. Liquefaction occurs at -253°C and cryogenic (liquid) hydrogen is subsequently stored in specialized, highly insulated tanks. The extreme cooling and storage processes are both energy intensive. Transportation of liquid hydrogen has predominantly been via road. There are several early-stage projects investigating shipping cryogenic hydrogen but the planned volumes are too small to be economically viable.

LOHC is a disruptive technology which enables hydrogen to be stored and transported like oil. This means that existing fossil fuel infrastructure can be repurposed and used to transport vast quantities of hydrogen via rail, sea, and land utilising oil pipelines, crude oil tankers, petrol trucks and storage facilities.
LOHC also enables hydrogen contained within it to be stored and transported safely at ambient temperatures and pressures. LOHC molecules are widely available and can be reused hundreds of times.

As new sources of distributed low-carbon hydrogen production emerge, hydrogen hubs will develop. These hubs, located close to low-cost renewable power and hydrogen generation assets, will store hydrogen in various forms and act as transport gateways. Hydrogenious’ technology can link these hubs and create a global hydrogen infrastructure network, providing large-scale storage and international transportation of low-cost, low-carbon hydrogen.
In an example below green hydrogen is produced at scale from electrolysis plants in the Middle East and piped to a central hydrogenation and storage facility, utilising existing infrastructure. Hydrogen is bonded to the LOHC molecules (creating LOHC+), allowing storage at ambient conditions. LOHC+ is then loaded onto conventional crude oil tankers and shipped to a delivery hub in the US. At the delivery hub LOHC+ is unloaded for dehydrogenation (the removal of hydrogen) and the tanker is refilled with LOHC- which has been depleted of hydrogen. The tanker then returns to exchange LOHC- and collect more LOHC+.

An overview of this is shown below, and key assumptions are detailed in Appendix 1. 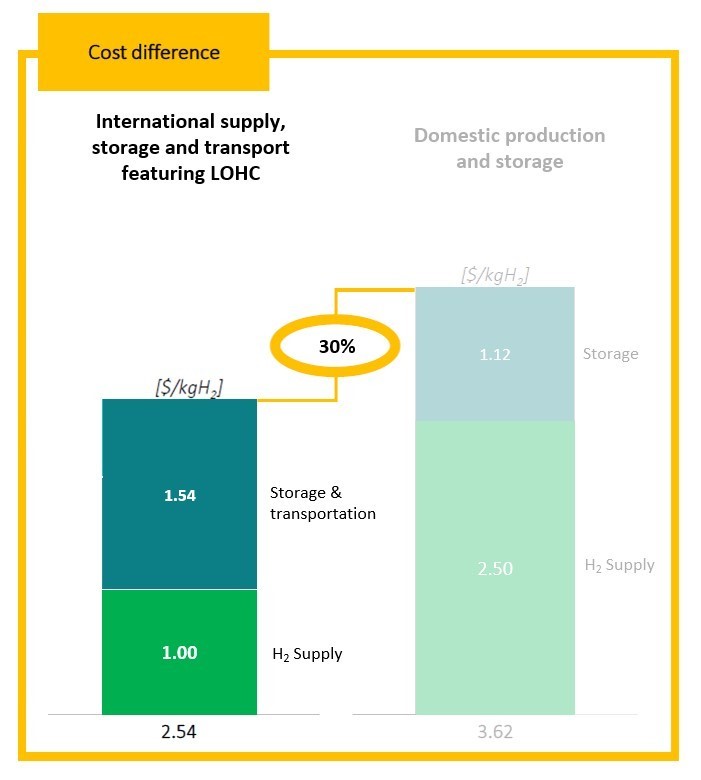 LOHC technology is safe and cost-effective. By using existing global oil transportation infrastructure, LOHC technology provides the ideal solution for global, low-carbon hydrogen storage and transportation. The use of LOHC will enable hydrogen to become an internationally traded commodity while avoiding wasteful new investment with incumbents using traditional hydrogen technologies, bespoke ships and dedicated storage facilities. Hydrogenious is deploying this technology with its partners across Europe and the USA and is creating exciting new opportunities for organisations shaping the future of renewable energy development and hydrogen trading.

Appendix 1: Key assumptions and explanations used in this cost model

This article was initially published by Charlie Clark, VC Associate at AP Ventures, on LinkedIn.