Hydrogenious LOHC Technologies GmbH and Johannes Østensjø dy AS have founded the joint venture company Hydrogenious LOHC Maritime AS. The aim is to develop and market emission-free liquid organic hydrogen carrier (LOHC)-based applications for shipping, having a commercial product ready for operation from 2025. The focus is on on-board LOHC/fuel cell propulsion systems on a megawatt scale. By binding the hydrogen to the LOHC, this will be a particularly safe technology. Moreover, Hydrogenious’ Liquid Organic Hydrogen Carrier applies to conventional bunkering facilities onboard as well as in the ports. The funding agency Enova, owned by the Norwegian Ministry of Climate and Environment, announced today to support the joint venture’s initial project HyNjord with NOK 26 million (about 2,5 million Euros).

“We’re very happy to have found the ideal partner in the Østensjø Group. The Østensjø Group, which is well established not only in Norway but also internationally, has seen LOHC as the game changer for the decarbonisation of shipping for some time”, comments Dr Daniel Teichmann, CEO and founder of Hydrogenious LOHC Technologies and the joint venture’s Chairman of the Board. “The strategic planning for the new type of service operation vessel with LOHC was already a done deal at Edda Wind. Optimal for us to bring our stationary systems not first on the road, but sensibly on the water. Based on an exclusive worldwide licence agreement, Hydrogenious LOHC Maritime AS will make our proprietary LOHC technology available for onboard solutions for sustainable maritime traffic, i.e. develop, final assembly and market integrate carbon-free propulsion systems and offer aftermarket and other related services.” Hydrogenious LOHC Technologies will itself work on integrated onboard solutions of LOHC release unit and fuel cell for heavy-duty transport, Daniel Teichmann further explains. 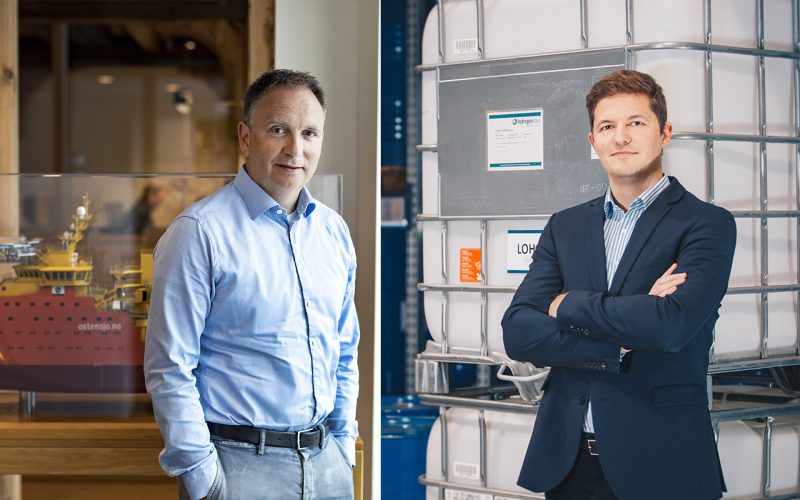 “The Østensjø Group is committed to take part of the energy transition and to find ways to cut emissions. Of all the potential zero-emission technologies, we find LOHC the most promising one. That is why we have prepared all six service operation vessels under construction in our subsidiary, Edda Wind, for LOHC-based propulsion. Safety is of course very important for us in these evaluations. However, the fact that we can use existing fuel infrastructure and are able to use familiar fuelling procedures is of importance. In addition, we can easily carry enough energy onboard our vessels in order to operate in normal intervals of up to four weeks without refuelling”, says Håvard Framnes, Investment Director in Østensjø Group as well as board member in Hydrogenious LOHC Maritime.

“In Østensjø, we are very excited about this joint venture and the cooperation with Hydrogenious LOHC Technologies. We believe the technology provided by the joint venture can be suitable for most shipping segments, which makes the market potential huge for the company. We believe in the LOHC technology and are excited to be part of developing new innovative and sustainable solutions for the industry”, continues Framnes.

Enova SF has decided to fund the development of a 200 kw pilot of the LOHC/fuel cell propulsion system – the focus of the first joint venture project HyNjord – with NOK 26 million (about 2.5 million Euros). The planned application will integrate three core components on-board: The LOHC Release Unit, which releases hydrogen from the liquid organic carrier Benzyltoluene on demand on the ship, as well as a fuel cell and an interface to the ship’s power management system.

“We see a need to develop technologies for the use of various zero-emission energy carriers. LOHC will be a new alternative to compressed and fluid hydrogen, and the different energy carriers will probably have different advantages and areas of application. The HyNjord LOHC-project will give us valuable information in order to contribute for hydrogen to become a real alternative to fossile fuels”, says Øyvind Leistad, Marketing Director in Enova.

(Read more about the Enova funding Norwegian only)

German based Hydrogenious LOHC Technology GmbH has developed and patented the LOHC technology for a particulary safe, easy and efficient storage and transportation of hydrogen, which will revolutionise the supply chain for hydrogen. The unique feature is that hydrogen is chemically bonded to the low-toxic, non-explosive and low-cost carrier oil, which can be used to store and transport large quantities of hydrogen under ambient conditions, using the already existing fossil fuel infrastructure. The carrier oil Hydrogenious LOHC uses – Benzyltoluene – can be loaded and unloaded with hydrogen many hundreds of times and is recyclable many times over.