Kokkola & Espoo/Finland, Erlangen/Germany, April 27, 2021. Despite the restrictions imposed by the Covid-19 pandemic, the HySTOC EU project initiated in January 2018 and located in Finland has reached important milestones in successful cooperation between its Finnish, Dutch and German partners: The Liquid Organic Hydrogen Carrier plant system from the German market leader Hydrogenious LOHC Technologies for the storage and release of hydrogen from the liquid carrier medium has started operation without any problems at local double-digit sub-zero temperatures. Now, the participating Finnish research institute VTT in Espoo is operating the hydrogen release plant and testing the quality of the re-released hydrogen over a minimum period of six months. The released hydrogen is planned to fulfil very strict purity demands in order to be applicable with fuel cell vehicles. Afterwards, there is nothing technically standing in the way of installing the so-called release box at its final destination, a public hydrogen refueling station.

The EU project HySTOC stands for „Hydrogen Supply and Transportation using liquid Organic Hydrogen Carriers“. The aim of the project is to establish and test an efficient hydrogen value chain in Finland, from production (Kokkola site, partner company Oy Woikoski AB) to use in the mobility sector via a hydrogen filling station, in order to facilitate international learning. The proprietary LOHC technology of the German Hydrogenious LOHC Technologies GmbH and its plant systems based on it are the linking component. By connecting the hydrogen to the Erlangen-based company’s liquid carrier material, it can be easily and safely transported to any customer using conventional logistics for liquid fuels at ambient conditions and released from the carrier there. With the so-called Pressure Swing Adsorption (PSA) of the project partner HyGear, the hydrogen released from the LOHC is purified to hydrogen fuel standards, for refuelling cars or trucks with fuel cell engines. The VTT Technical Research Centre of Finland and the German Friedrich-Alexander University Erlangen-Nuremberg (Chair of Chemical Reactor Technology) are the scientific research partners in HySTOC. 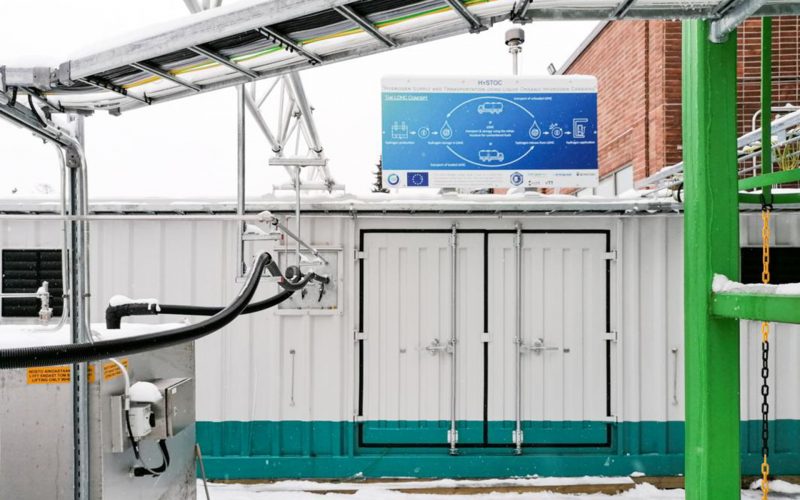 Hydrogenious LOHC Technologies‘ StorageBox, shipped in March 2020, has now been successfully commissioned at the Woikoski’s hydrogen production site in Kokkola – despite the local -23 degrees Celsius. The StorageBox in the project can store around 22 kilograms of hydrogen per day, bound to approximately 480 litres of the carrier medium. The ReleaseBox corresponding to the volume, which was delivered in November 2020 to VTT’s Bioruukki test facilities in Espoo, also went into operation. Hence, a central phase in the project has now started: The ReleaseBox will be operated in Espoo over 2,000 hours and the quality of the released hydrogen will be scientifically tested. This is because the purity of the hydrogen according to ISO 14687:2-2019 must be ensured for use in fuel cells. Additionally, VTT will study the effect of certain selected impurities in a 1 kW PEM FC system (Proton-Exchange Membrane fuel cell) at representative automotive conditions at steady state and cyclic operation. “VTT has a long history in gas analysis and PEMFC research, this knowhow will be utilized in HySTOC project in order to understand the full potential of this LOHC-based technology for automotive applications,” comments Dr. Saara Viik the project manager at VTT. VTT’s experts finalized a full life cycle and techno-economic assessment of this technology last year and found out that this can be both environmentally and economically sustainable compared to pressurized or liquid hydrogen. If everything goes as planned, within six months, Woikoski’s PEMFC vehicle will be fuelled with the hydrogen from the ReleaseBox. 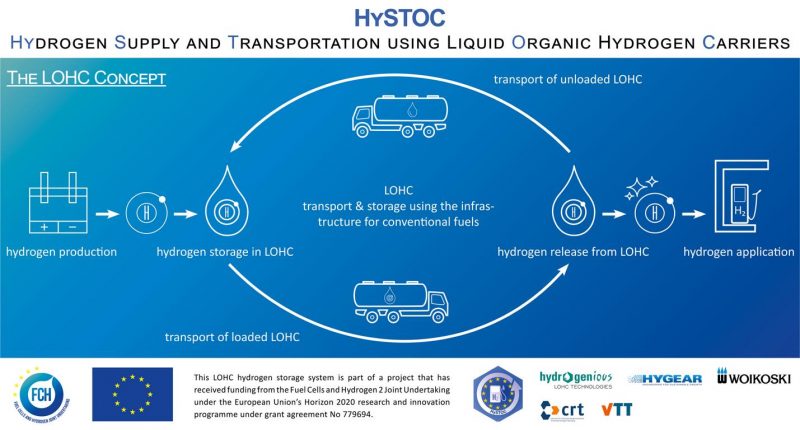 Operations in Woikoski has started softly. The company’s role started in implementation. It established the test facilities and assembled the StorageBox/ReleaseBox and assisting operational systems (electricity, automation and pumping systems) required to both Kokkola Hydrogen Production Site and in Espoo VTT, in co-operation with the organization. It went smoothly despite the corona pandemic, and the typical Finnish winter season with its’ freezing periods time to time. Woikoski is also producing the hydrogen for the test in the Kokkola Hydrogen plant, then binding the hydrogen to the liquid carrier material, with the assembled technology. Furthermore, the company is responsible for transporting the processed hydrogen to Espoo by the liquid fuel unit and release the hydrogen from the carrier in the ReleaseBox, to be scientifically tested by VTT.

“The knowledge gained in the HySTOC project is significantly contributing to the further standardisation and scaling of our LOHC technology”, explains Dr. Marcus Guzmann, Chief Commercial Officer of Hydrogenious LOHC. “At the same time, the HySTOC project in Finland is now kind of competing with another LOHC project of ours, supplying a hydrogen refuelling station in Erlangen/Germany (partner H2 Mobility). It gets exciting to see where the first practical start will take place and where the logistical chain of LOHC-based technology is demonstrated from electrolysis to wheels for the first time.”

About Hydrogenious LOHC Technologies GmbH
Hydrogenious LOHC Technologies adds the missing link to high-performing hydrogen value chains globally. Based on its proprietary and proven Liquid Organic Hydrogen Carrier (LOHC) technology with Benzyltoluene as carrier medium, Hydrogenious allows for superior, flexible hydrogen infrastructure, that supplies consumers in industry and mobility across the globe by utilizing conventional liquid-fuel infrastructure. The leading LOHC pioneer offers (de-)hydrogenation plants and O&M services, ensuring safe, easy and efficient hydrogen storage, transport and distribution. The German-based SME was awarded with i.a. “The Innovation Prize of the German Economy” as well as has been recognized on the „Global Cleantech 100“ list four times in a row. With its >100 staff members and strategic investors AP-Ventures, Covestro, Hyundai Motor Company, Mitsubishi Corporation, Royal Vopak and Winkelmann Group, Hydrogenious LOHC the midstream player is a major enabler and accelerator for the energy transition. www.hydrogenious.net

About HYGEAR
At HyGear, we believe that hydrogen will be the fuel of the future. With state-of-the-art technologies to generate and recycle hydrogen at or near the end users’ site, HyGear offers the most optimal and cost-efficient supply with the best reliability and lowest environmental impact. Providing worldwide services in the existing industrial gases market and the upcoming market for hydrogen energy, HyGear is set on a mission to establish local hydrogen sources globally. As a member of the Xebec Group, we are dedicated to help the world transition to a low-carbon future. Together with our affiliated companies, we deliver premium technologies for renewable natural gas, hydrogen as clean future energy carrier, and on-site generation and recycling of industrial gases. With a global network of technical services companies, we are able to provide installation, servicing and maintenance of our equipment worldwide. www.hygear.com | www.xebecinc.com

About Woikoski
Oy Woikoski Ab, an innovative and forward-looking company, established in 1882, is an independent Finnish family business specialised in the gas industry. We produce gases and work among gas network solutions, services and devices. Furthermore, we offer equipment for the medical sector, as well as welding products and services. Our hydrogen manufacturing has started already in 1913. During 2010 – 2014 we built new European’s most effective hydrogen plant at that time, and three hydrogen filling stations, two to Finland and one to Sweden, we also invested in hydrogen transportation units.
www.woikoski.fi

About Friedrich-Alexander-Universität Erlangen-Nürnberg & Chemical Reaction Engineering (CRT)
The Friedrich-Alexander-Universität Erlangen-Nürnberg (FAU) is one of the few comprehensive universities in Germany with a strong faculty of engineering. The Institute of Chemical Reaction Engineering (CRT) (head of institute: Prof. Peter Wasserscheid) is part of this faculty in the department of Chemical- and Biological Engineering. Since 2009, the Wasserscheid group focuses its research efforts on chemical energy storage technologies, in particular on hydrogen storage using Liquid Organic Hydrogen Carrier (LOHC) systems. The group develops this technology for stationary and mobile applications. CRT’s core competence is the catalyst development and the design and testing of novel reactor concepts. CRT has an excellent track record in successful technology transfer and acts at the interface between fundamental engineering research and R&D towards technical commercialisation.
www.crt.tf.fau.de

About VTT
VTT Technical Research Centre of Finland Ltd is a state owned and controlled non-profit limited liability company established by law and operating under the ownership steering of the Finnish Ministry of Employment and the Economy. VTT is impact-driven and from its wide multi-technological knowledge base, VTT can combine different technologies, produce information, upgrade technology knowledge, and create business intelligence and added value for its stakeholders. VTT has a staff of 2400 and turnover 258 M€ (2017). VTT receives approximately one third of its total income directly from the Finnish government. This allows VTT to carry out high-risk strategic research and to invest in research and technology infrastructures, which are necessary to generate the knowledge and expertise required for fulfilling VTT’s public mandate. VTT fuel cell research supports industry product development by maintaining a development platform comprising of a large selection of research facilities, a selection of developed modelling tools and expertise encompassing different technologies throughout the entire business chain. The main research areas today are PEMFC and SOFC, including systems, applications, demonstrations, stacks, components, and materials. In addition, the fuel cell research is closely connected with the work on electrolysis and hydrogen quality. VTT is a member of N.ERGHY Research Grouping. www.vttresearch.com/

About the Fuel Cells and Hydrogen Joint Undertaking
The Fuel Cells and Hydrogen Joint Undertaking (FCH JU) is a Public Private Partnership in which the European industry, research, academia (represented by Hydrogen Europe and Hydrogen Europe Research) and the EU (represented by the European Commission) work together to accelerate the deployment of fuel cell and hydrogen technologies. The FCH JU supports a wide range of projects, which help to put the EU at the forefront of research and innovation, bring the benefits of the technology to the citizens and enhance industry competitiveness.