On December 16, 2019, German Economy Minister Peter Altmaier handed over the funding decision to the first „Regulatory Sandbox of the Energy Transition“. A consortium of nine partners – including Hydrogenious LOHC Technologies – led by the energy company innogy SE, supports the „SmartQuart“ project. It is the first regulatory sandbox project to receive funding from the Federal Ministry of Economy and Energy (BMWi) and the first to enter the implementation phase on the 1st of January 2020.

The goal of the project is to optimize intelligently the energy flows within and between the neighbourhoods and to increase the integration of renewable energies. In this process, the energy carrier hydrogen will play an important role. In the cities of Essen and Bedburg in North Rhine-Westphalia as well as Kaisersesch in Rhineland-Palatinate, the individual neighbourhoods will be smartly connected within themselves and with each other. The differently structured neighbourhoods will be able to exchange energy sustainably and economically.

Smart grid solutions will intelligently combine heat, cold, green electricity, hydrogen and mobility. „With our innovative LOHC hydrogen storage technology, we want to contribute to the smart energy networking of the different areas. In the hydrogen transport demonstrated within the SmartQuart project between a rural region as net producer and an urban neighbourhood as net consumer, we see a model for the future development of a European energy network based on hydrogen,“ says Daniel Teichmann, CEO of Hydrogenious LOHC Technologies. In Kaisersesch, hydrogen is stored in the LOHC oil using a StorageBOX. It can thus be transported via the infrastructure for conventional fossil fuels to a bus refueling station 180 km away, stored there simply and safely and released using a ReleaseBOX.

„Consumption and production are already being optimized at the local level. The different sectors within the neighbourhoods are connected with each other. This will demonstrate a holistic, sustainable and scalable neighbourhood concept for a renewable energy and heat supply,“ explains Dr. Philipp Werdelmann, Project Manager ‚SmartQuart‘ at innogy. 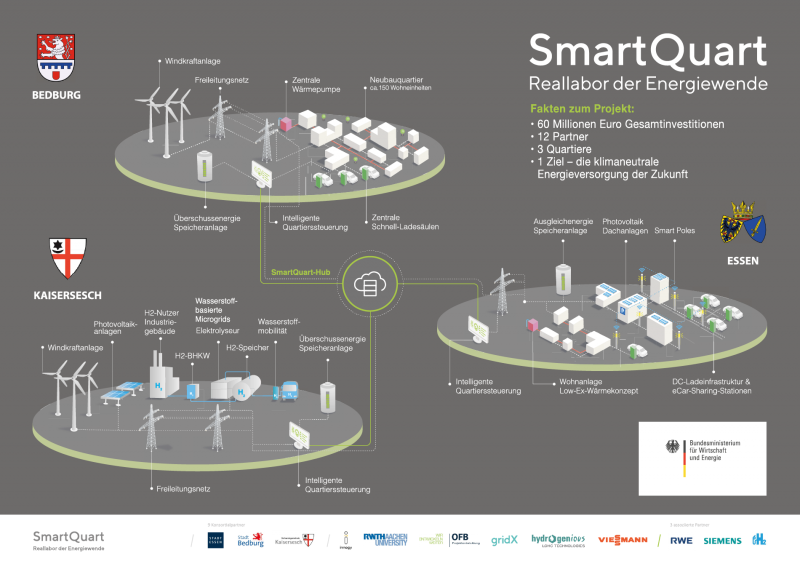 About SmartQuart
SmartQuart is the first regulatory sandbox to be funded by the BMWi as part of the 7th Energy Research Programme. Typical neighbourhoods are represented in the project, from low-density rural areas to very high-density urban areas. The concepts can be transferred to other neighbourhoods by depicting three typical areas in Germany. In all three neighbourhoods, residents, energy suppliers and local technology providers are involved in the implementation of SmartQuart. In addition to innogy, project partners include gridX GmbH, Hydrogenious LOHC Technologies GmbH, OFB Projektentwicklung GmbH, RWTH Aachen University, City of Essen, City of Bedburg, Kaisersesch Association of Municipalities and Viessmann Werke GmbH & Co. KG. Associated partners are RWE Power AG, Siemens AG and H2 MOBILITY Deutschland GmbH & Co.KG.

About the neighbourhoods
In order to implement the energy transition in the Bedburg district, a „green“ local neighbourhood energy (thermal energy and household electricity) will be used. The energy will be generated locally by a new wind power plant, which will be built in the course of an expansion of the local wind farm, and in new local PV plants and consumed in the neighbourhood. Highly efficient central and decentralised heat pumps will also be used.
In the rural municipality of Kaisersesch, a hydrogen-based microgrid is to be set up. This covers the entire value chain from the generation, conversion, storage, distribution and use of renewable energy by end consumers in the heating, electricity, mobility and industrial sectors. The aim is to integrate renewable energy into the energy system.

In the Literaturquartier in Essen, the former site of the Westdeutsche Allgemeine Zeitung (WAZ), a new neighbourhood is being created consisting of a residential area, small businesses, office and hotel buildings. A PV and hybrid PV system will enable the high-density urban neighbourhood to generate its own energy. In addition, charging stations and e-Car and Bike-Sharing will provide new mobility options and the balancing of energy consumption and generation will be optimised by the use of a central neighbourhood storage system and an intelligent digital neighbourhood energy management system.

About the „Regulatory Sandboxes of the Energy Transition“
„Regulatory Sandboxes of the Energy Transition“ are a new funding pillar in the Federal Government’s 7th Energy Research Programme. Companies are testing the real operation of new technologies on a large scale in one region. Together with partners from science and research, they also analyse the interactions with the energy system and society. On site, it will be demonstrated how actors and technologies of the energy system transformation interact. In this way, valuable experience is gathered to accelerate the transfer of innovations into practice. The results of the regulatory sandboxes should also show how the legal framework must be further developed in order to enable the broad application of the technologies investigated.